Customers are often curious about the history of our Grant Road store.  With its lofty beamed ceilings and brick floors, funny little rooms, fireplaces and hand-decorated lintels, it is obvious to many who enter our Grant Road store that it is a very unique building. The ambiance gives it a very homey feeling,and many people ask, “Was this a home?” Well, the answer is yes, sort of.

The story begins right after WWII, when a transplant from Virginia named Archie Downs bought a parcel of land on the corner of the 3400 block of Grant Road at Sparkman Blvd. Downs, who had built other rental houses in the Palo Verde and Blenman Elm neighborhoods, constructed a trio of rental homes on this corner property, and he built one for his family nearby on Sparkman Blvd.

In 1962, local sculptor and restaurateur Jesus Corral and his family opened a small Mexican restaurant in the 3300 block of Grant Road, just 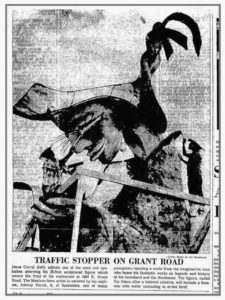 West of Downs’ rental houses. The restaurant, named Tia Elena, grew to be quite popular in the area, and within a few short years it became imperative for the Corrals to enlarge their restaurant to keep up with the demand.

About this time, Archie Downs and his wife were in the midst of a divorce, and the trio of rental properties went up for sale. Jesus Corral bought the three Downs rental homes in the 3400 block of Grant Road with a clever plan of combining them into one large space. The Corral family gutted the two houses facing Grant Road, connected them with new brick walls, and built up and out to create the space we have today. As he had done with the previous Tia Elena Restaurant, Corral decorated the interior with his own fanciful sculptures and 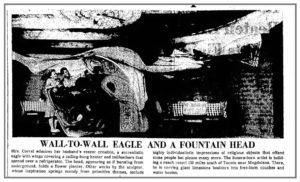 created the large sculpture seen in the front of the building.

The giant sculpture which faces Grant Road is “Tia Elena” and she was originally built as a fountain, with earrings aglow with colored lights, and water spilling down from the bowls in her hands into the large basin beneath her. But according to Jesus Corral’s son, Alex, the basin was plagued with problems, and after several attempts to patch the leaky basin it was decided to simply turn off the water and fill it in with dirt. 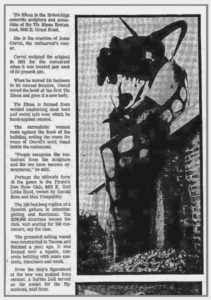 Tia Elena was a hit with Tucsonans and as the restaurant’s popularity continued to grow, the Corral family decided to tear down the remaining rental house on the property and expand the parking lot. According to Alex, they felt the land would generate more revenue as a place for customers to park than as a rental house, and so down it came. They then built the patio, and added a bar, and by 1970 the restaurant was finally complete.

In the twenty years that followed, Tia Elena became the “in” place for teenage boys to take their prom dates, for suitors to propose to their girlfriends, and for families to gather for frequent dinners. The restaurant hosted many, many birthdays, anniversary dinners and quinceaneras. Once the bar was added, it became a popular after-work watering hole for businessmen and college students. People who remember eating at Tia Elena recall excellent food and service. One has even claimed Tia Elena made the best flan to be found in Tucson.

Numerous claims that Tia Elena was haunted didn’t scare away business. Customers and employees report having seen a mysterious woman in red inside the restaurant. Pots and pans were known to be moved from their shelves to the floor when nobody was in the building. Even to this day, there’s one part of the building where things are known to move on their own in the wee hours of the morning!

Eventually, the Corral family retired from the restaurant business, and the building went up for sale. Tom Ward, whose furniture resale business was booming, bought the Tia Elena building and moved his operation from its tiny location at Alvernon and Speedway into the much larger former restaurant, and the rest, as they say, is history. To this day, former Tia Elena customers happen into the Grant Road store and reminisce about the good times and great food they once enjoyed in this location.

The fate of the Grant Road store seems pretty secure. The 20 foot tall sculpture of Tia Elena in front of the building is reportedly on the local historic register and thus the building, of which it is a structural part, is protected. The widening of Grant Road will not affect our store. That is Tia Elena’s legacy! 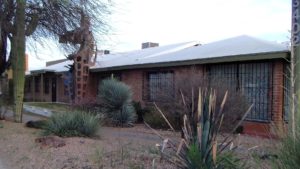 A lot of our customers ask about the enormous crystal chandelier in the center of the Grant Road store. Here’s what we know about it.

The chandelier was made in France sometime in the mid-late 1800’s. The prisms are reportedly made of Baccarat crystal. It is almost 6 feet tall and nearly 3 feet in diameter at its widest point. Needless to say, it is extremely heavy!

According to legend, Abbey Grunewald of Grunewald and Adams jewelers, once Tucson’s most prestigious fine jewelry stores, went on a buying trip to Paris, France in 1939. While she was there, she found this magnificent chandelier and she bought it, had it crated up and shipped to Tucson. She also had her eye on another chandelier, but before she could return to Paris, war broke out in Europe and prevented her from returning.

In the 1970’s when Grunewald and Adams opened their store in El Con mall, Abbey had the chandelier hung in the store. In 1995, after almost 90 years of selling fine jewelry in Tucson, Grunewald and Adams closed, and Tom’s Fine Furniture and Collectables owner Tom Ward purchased the chandelier. It has been hanging in the Grant Road store and fascinating our customers ever since.

THE NEW CHAPTER ON GRANT ROAD

Starting in May of 2020, Tom’s opened a new store on Grant Road, located only a few blocks from our old Grant Road store. The new store, in what was formerly the Shall We Dance studio (and before that, Jones Photo, for all who remember that far back), is approximately double the floorspace of our old Grant Road Store. It is also easier to find as you travel down Grant Road!

The new address is 4041 East Grant Road, on the North side of Grant between Columbus and Alvernon. It is on the Northeast corner of Grant and Walnut. For landmark drivers, our new store is two doors West of The Shelter bar, and across the street from Stacy Tool. We encourage you to come check out our new store for even more wonderful items.

As a result of the new store opening, we have closed the former Tia Elena store while we reinvent that location.